U.S. House Rep Cori Bush (D-MO) tweeted a thread of graphic and vulgar messages she claims were sent to her by “White Supremacists”. She says those people have “wanted her dead” since before she got to congress.

We can’t say for sure whether or not all the screenshots are real. We assume politicians on both sides of the aisle of both races get “hate mail”. One of the many screenshots in the vulgar thread posted by Bush was questioned by many on Twitter though.

The purported screenshot was supposed to be from a form on Bush’s own website. But, as many on Twitter pointed out, the red asterisks imply it may be photoshopped or edited, because if it had been submitted, the asterisks would be gone. Matt Palumbo of the Bongino Report tweeted: “This is an unsubmitted form”. See tweet:

This is an unsubmitted form lol https://t.co/HeWmik9mBS

It’s a screenshot with red asterisks on a Google Form, which means the form is unfinished/unsubmitted

This is literally a hoax lmao https://t.co/4isgEyDhXy

you wrote this yourself https://t.co/kxH9BFw4jK

Hello Congresswoman, I just went to your website where one requests a meeting with you.

This is the exact unsubmitted form I was met by.

How exactly are you in possession of this unsubmitted form, which was apparently filled out by white supremacists,but never turned in to you? https://t.co/IELqUBB6jV pic.twitter.com/dAGr2bA2Iq

Time will tell if an explanation for this surfaces. Meanwhile, we don’t condone any of the things Bush alleges were sent to her if they were actually sent to her in the first place. Some on Twitter compared her to Jussie Smollett.

We recently reported that Bush herself has been accused of racism, after anti-White fourth of July comments. We posted in part:

Monday, civil rights attorney and radio host Leo Terrell called out Speaker of the House Nancy Pelosi for her lack of action on members of congress, who Terrell claims are making “racist comments”. Leo calls the Speaker “weak” and accuses her of being afraid to criticize specific black female Representatives, for their racist comments on the Fourth of July, for fear of being canceled.

Terrell specifically names Representatives Maxine Waters (D-CA) and Cori Bush (D-MO). The pair both tweeted anti-American racial specific tweets on the Fourth of July. Bush declared that Blacks aren’t free in America and freedom is just for White people. Waters attacks the Declaration of Independence, questioning ‘equal to what?’. Waters too makes it about race and declares that the Declaration of Independence was only for White people and that “they weren’t thinking about us” [Black people].

Latest posts by Ian MacDonald (see all)
2021-07-24
Previous Post: Biden Upsets Fugitive Texas Dems After Giving Them the Cold Shoulder; Beto O’Rourke Urges Them to Ramp Up Pressure
Next Post: AZ State Sen Michelle Ugenti-Rita Gets Booed Off the Stage At Turning Point USA ‘Rally to Protect Our Elections’

‘Nancy Pelosi’s Wall is Back But Not Our Border Wall!’ MTG Shares Video of Re-erected U.S. Capitol Fence

Lt. Col. Alexander Vindman, who was removed from his post by former

Baby Terrified, Tries to Push Away As President Biden Leans to Kiss Him at Colorado Event

A video of Joe Biden in California, after his visit to Idaho, 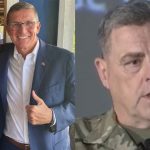 In an interview today with Newsmax, Gen. Michael Flynn called for Mark

Rogers: Sheriff Joe’s Not Done Yet, May Run for Mayor of Fountain Hills Arizona to Uphold the Law

Sheriff Joe Arpaio, who once received a presidential pardon from former President

Caitlyn Jenner Finishes Behind Other Challengers, Garners Only 1% of the Vote in California Recall Election

Despite entering the race to great fanfare, Caitlyn Jenner garnered only 1%