White House Press Secretary Kayleigh McEnany held a press conference today in the Press Briefing room and she fielded questions regarding the continued rioting in cities by leftist agitators and they compared it with Trump supporters who have been pushing back against it.

After 90 days of violence and riots, a reporter finally gets around to asking a related question… about alleged Trump supporters shooting paintballs at protesters.@PressSec rightfully calls out the insane double standard and hypocrisy from the media: pic.twitter.com/HUyh5426qp

The full exchange started with the reporter asking McEnany about a video that was retweeted by the president that showed a caravan of Trump supporters heading into Portland and called them “great patriots.”

He asked, “what about that image does the president see as patriotic?” He said, “you are talking about people going into a city in which they don’t live to presumably protect property they don’t own.”

She said that she believed McEnany did not give a direct answer. “The police should be funded fully and the president is against the defund the police movement,” McEnany said.

My Q: Why won't Trump condemn everyday Americans bringing guns to protests to protect buildings including traveling to cities where they don't live?@PressSec: The police should be funded fully and the president is against the defund the police movement.

(Not a direct answer.)

McEnany summed up the situation at the end of the press conference. “So now all of a sudden ninety days later, I from this podium have talked about law and order, the President has talked about law and order repeatedly but because the polling has shifted, um, now it’s time for the Democrats to deny what they said previously and all of a sudden focus on law and order. Um, I’ll leave you with this: That’s like the arsonist blaming the firefighter,” she said.

I'm not sure many in WH press corps are capable of shame at this point, but that sure sounds like shameful silence at the end.

"I'll leave you with this: that's like the arsonists blaming the firefighter." – @PressSec pic.twitter.com/BPYy6Ka4pT

Latest posts by David Caron (see all)
2020-08-31
Previous Post: Jeb Bush Ally Gearing Up to Spend Millions to Try to Help Biden Beat Trump in Florida
Next Post: Suspected Killer of Trump Supporter Was Protesting at Mayor Wheeler’s Condo With 11-Year-Old Child the Night Before 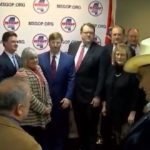 Today on the U.S. House floor, members of Congress spoke about a