“And these are the States I supposedly lost (but didn’t!)?” Trump wrote in a statement released through his “Save America Pac” on Monday.

The poll revealed Trump would beat Biden in Michigan, by 12 points, Wisconsin, by 10 points, Arizona, by 8 points, Pennslyvania, by 6 points, and Georgia, by 3 points.

Michigan, Wisconsin, Arizona, Pennsylvania, and Georgia are all states that Trump supposedly lost in the 2020 presidential election.

Not only that, Trump’s polling revealed Trump would beat Biden in the popular vote, too, by 3 percent.

Top Republican pollster who conducted these surveys for Trump’s new super PAC, Tony Fabrizio, says, “Poll after poll clearly demonstrates that former President Donald Trump is still the 800-pound gorilla in the GOP and would be its 2024 nominee should he run.”

“This new data clearly shows that today the voters in these five key states would be happy to return Trump to the White House and send Biden packing,” Fabrizo added. 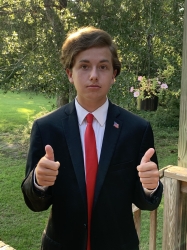 Follow Me
Reed Cooper
Reed Cooper is a 17-year-old die-hard supporter of President Donald Trump and has supported him since the beginning day of his campaign in 2015. Reed wears Trump shirts everyday and has worn them for the past five years. He is the author of all news articles on "Reed Cooper News." Reed also creates pro-Trump memes, which have been posted by Trump's eldest son, Donald Trump Jr.

Fleetwood Mac’s Christine McVie Has Tragically Passed Away at 79

Christine McVie passed away on Wednesday, November 30th after a short illness.

Leo ‘2.0’ Terrell Puts Mike Pence on Notice: ‘President Trump Does NOT Need to Apologize for Anything!’

Elon Musk Calls it an ‘Obvious Reality’ That Twitter Has ‘Interfered in Elections’ in the Past, Promises Change

Washed up Actor Jim Carrey Announces he will be Leaving Twitter, Soon

This morning Jordan Peterson tweeted, “This seems like a really really bad