President Trump has been apparently feeling much better following his bout with the Coronavirus, so much so that he has been showing off some new dance moves at his rallies lately, one of which went viral on the TikTok app.

2004 Democratic presidential nominee John Kerry, who lost to George W. Bush, shared a copy of the TikTok video and asked, “And you people called ME Lurch?!?”

And you people called ME Lurch?!? pic.twitter.com/DuDT4IRSAh

Rush Limbaugh was the one who coined the term for Kerry when he was running for the White House at the time. “He’s not a living human being. He is Lurch. He comes walking in the Addams Family,” Limbaugh said at the time.

“This is a guy that will not get noticed when he walks into a room unless somebody, some aide comes in, ‘All talking stop, John Kerry The Great is here,'” Limbaugh added.

Seinfield’s Jason Alexander also tried his hand at insulting Trump, retweeting Kerry and saying, “The President is apparently a fan of @OfficialJLD‘s famous I can’t dance for sh*t moves. Julia was working hard to be that awful. I feel like these are his best moves.”

The President is apparently a fan of @OfficialJLD ‘s famous I can’t dance for shit moves. Julia was working hard to be that awful. I feel like these are his best moves. https://t.co/fNGCnzdahX

ABC News Campaign Reporter Will Steakin noted that “Trump supporters on TikTok are starting to do the Trump dance he’s been doing at rallies FYI.”

Trump supporters on TikTok are starting to do the Trump dance he’s been doing at rallies FYI pic.twitter.com/1UjKlzGuFx

Trump supporter @BeyondLounger shared a TikTok video of a young woman doing the dance, and said, “Party like it’s Trump 2020” along with a smiling face emoji.

Latest posts by David Caron (see all)
2020-10-18
Previous Post: Trump Campaign Says Gov. Whitmer ‘Can’t Have It Both Ways’ After Potential Hidden Message in NBC Interview
Next Post: Man Dangles From Rope off Chicago Trump Tower and Reportedly Demands to Speak to The President 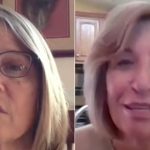