Previously we reported that the red county of Floyd in Georgia had improprieties that led to the election director being fired. Floyd is a red county.

It is now being reported that “swing” Dekalb County which covers part of the solidly Democrat city of Atlanta just fired their elections manager for not following procedure. The county issued the following statement:

“It has come to our attention that a DeKalb VRE manager, who is now a former employee, failed to follow our established protocols and blatantly disregarded the required processes we utilize to account for and record all legal and verified ballots.”

Dekalb county has fired an Election manager because of election count errors discovered during the audit. the now former employee: “blatantly disregarded the required processes” Dekalb’s numbers were off by 732 votes pic.twitter.com/lfNc2mclt9

It is also being reported that Georgia has completed its recount which confirmed Joe Biden’s win in the state, as they plan to certify the votes later today.

But many Republicans are saying that it was a sham recount, including President Trump, as it was reportedly not a full audit such that would find potentially more broad voting improprieties.

House Rep Doug Collins (R-GA) said he was spearheading the recount efforts and GA Governor Brian Kemp said only legal votes would be counted. Both have been relatively quiet but Kemp has taken the brunt of the ire from Trump supporters for not doing more to help President Trump in their view.

It’s unclear to us what ramifications are left for the GOP in Georgia but lawyer Lin Wood has insisted he will continue to fight there. Meanwhile, the Trump campaign is still wrangling with lawsuits and evidence they claim to have to back them up in Pennsylvania, Wisconsin, Nevada, Michigan, Arizona, and possibly New Mexico and Virginia according to Rudy Giuliani’s press briefing yesterday.

It is still being reported that Joe Biden is president-elect and most mainstream pundits give the Trump campaign’s efforts little hope in their opinion. Nevertheless, the campaign pushes on, and it looks like Donald Trump won’t be conceding anytime soon.

Regardless of the final outcome, it is a general consensus that it is imperative to root out any possible voter fraud in any state or the GOP will not have a viable future. Although it’s unclear if there is enough fraud to turn over an election, the evidence does point to, in our view, the improprieties that have been uncovered being largely in favor of Joe Biden and the Democrats, although a lot of media outlets might beg to differ.

A point made by some right-wing pundits is that while the media claims there is no evidence, they often don’t appear to even be checking the evidence provided by Team Trump to even see if it is viable or not. It seems in the eyes of many still supporting President Trump that the media has already made up their mind regardless of what new information may come out which is somewhat disheartening to the American public.

It is imperative that the American people be able to trust their election system, no matter who wins. It’s also important that large swaths of people aren’t shrugged off as “conspiracy theorists” by the elite media corporations. 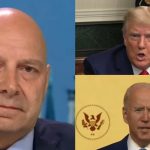