We will not embed the video here as it is graphic but if you click here viewer discretion is advised as this is a very sad and shocking turn of events for Ron Paul, the former congressman and presidential candidate, and Senator Rand Paul’s father. It was unclear if the video was real but the Daily Caller has confirmed its likelihood as you can see in their tweet below:

“It appears Ron Paul may have just suffered a stroke. Pray for him and his family.”

It appears Ron Paul may have just suffered a stroke. Pray for him and his family.

We will be sure to update this story as it develops with details to come. It is our hope that Ron is ok and survives this with no permanent problems.

A site called Insiderpaper.com reported that it happened on ‘The Liberty Report’:

In the recent live stream video, Ron Paul suffered from what seemed like a critical medical emergency. The media has yet to receive any kind of confirmation about the Congressman’s status from the Paul camp. Notably, his son, Rand Paul, is currently serving as the junior Senator from Kentucky. The incident was brought to the media’s attention due to the vast number of tweets being posted regarding Ron Paul’s concern.

Republican Congressional Nominee in Georgia tweeted her concern for Paul:

Everyone please join me in prayer for Dr. @RonPaul and his family 🙏

Conservative commentator and former congressional candidate Pete D’Abrosca had this to say:

“In many ways, Ron Paul was the original leader of the American populist movement. Prayers for him and the Paul family.”

In many ways, Ron Paul was the original leader of the American populist movement.

Prayers for him and the Paul family. 🙏🏽

UPDATE 2:08 ET: Business Insider reports that 85-year-old Ron Paul has been taken to the hospital for precautionary reasons but is lucid and it sounds like he may recover, although it’s unclear to say for sure without more information, so stay tuned.

Barack Obama Calls John Brennan ‘One of the Hardest-Working, Most Patriotic Public Servants’ He’s Ever Seen 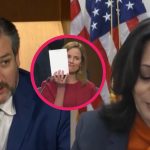